Couchsurfing is not only a community for travelers who host and “surf”, In Mexico we also organize a big meetup every year in a different city of our country during the second long weekend in November. For example in 2017 our annual meeting was celebrated at Morelia.

In particular, for us has been to plan trips before or after the meeting, we have met people who are initially strangers but with the time they had become our best friends with whom we have shared several and invaluable episodes in our trips. So for this reason, we will recapitulate the annual meetings in Mexico:

Six years ago, on a Friday night before the very first national meeting began, some of us went to Marcela’s house (one of the organizers) to meet some of the early travelers. We were not more than 20 people there and one of us gave some advice about the relevance of the moment, being the first time that many couchsurfers had been a part of something that was going to be told through the years.

Those event was emotional because we were sitting around a circle waiting for others to arrive, and we had activities to introduce ourselves, welcome and share travel experiences.

Thanks to the initiative of others surfers there were activities as a rally organized by Querétaro’s people, gastronomic sample and even a slip and slide in the middle of the area.

Without a plan of activities, we were dispersed and only we meet at night but was memorable to have a hundred people inside the beach with the full moon abobe us.

Durango (2014) was the first meeting that involved most support.

The Ministry of Tourism helped us with discounts in museums and attractions and we had the facility to enjoy a private screening of a video mapping in a historic building.

For this reasons, the community of Durango left the guidelines to improve national meetings in Mexico offering different activities to learn more about the city without just crossing half of the country only to drink with friends.

It was easy to disperse us through the Jazz Festival but at the same time was possible to contemplate a sunset at Punta Cometa and even swim with turtles.

In Hermosillo (2016) the community was very organized.

The agenda was varied, for example we went to popular bars, walked to see the street art of Hermosillo, knew the government palace murals and even an excursion to Tiburón Island to know the Séri culture.

Therefore, national meetings in Mexico have allowed us to meet other people around the country, remove that barrier of distance and allow us to plan trips that we could not do without the confidence of having the support of someone local.

And finally, if you go to a Couchsurfing meeting, we recommend …

Go without expecting anything, try to interact with as many people as possible because someone travel from far away and maybe is the only opportunity to know each other. Invite to visit your city and ask for tips to travel or hosting people, finally we are there to share our life with others. 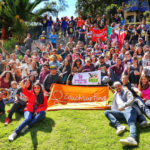