A seed of multiculturalism, where the sands of time empty endlessly into the Saharan basin, carrying with them memories of a distant past, therein lies Al Maghreb, the North African nation of Morocco. I was determined to experiment with an alternative form of travel, Couchsurfing, which provided an impracticable image but promised a key to unlock hidden wanderlust. However, the sticking point, I felt, was a lack of references on my newly created account. Without one, I was basically asking someone to take me in on the basis of limited information…my name, age and interests were about as much as I could muster. Despite this major disadvantage, after sending out roughly ten requests, I was accepted for one night by my first Couchsurfing host, Mohamed from Rabat. Although he quickly provided his personal number so I could reach him, I must admit I was still a little unsure, even at this point. What more, it didn’t help that the train was delayed for over three hours and the tangerine sky had begun to dim into a harsh dark purple.

As I exited Rabat train station, I pressed my digit to my ear in an attempt to drown out the feverish calls of ‘Taxi! Taxi!’ bouncing in-between my temples, pulling out my phone to contact Mohamed. He instructed me to approach a taxi and pass the phone to the driver so that he could explain the directions to him in Arabic. Before I knew it, the cab had turned into a district devoid of street lights and filled with the shadows of hooded figures prowling the streets, “Safi – That’s it,” the driver said to me as a stray dog paused at the sharp sound of the man’s voice. “Hamza Dirham.” I knew that was five and it seemed about right. We had only crossed a few blocks. I jumped out of the cab and remembered I hadn’t checked with Mohamed the name of his street, nor had I confirmed it with the taxi driver. You can get distracted easily when on edge. I stalled as I brought out my iPhone but gripped my senses and attempted to relax.

“Hello Mark,” he replied in perfect English. “Where are you?”

“I’m not sure… I think I am outside your house, but everything is dark and there are no street names. What’s the name of your street?”

“I’ll be right down,” he said, abruptly hanging up the phone.

I feared the worst. I was stuck in a labyrinth of dusty roads with my backpack in pitch black and could be miles away from my destination. Out of the darkness, someone was approaching me at a steady pace. All I could see was the bobbing light of a phone illuminating the road. As he came into view, I could not tell if it was Mohamed. All I had was a blurry Couchsurfing profile picture to go by,

“Hello Mark,” said the friendly familiar voice from the phone. “Are you ok?”

I was fine. I had worked myself up into a worry for no reason. Mohamed was splitting his sides when I told him what I was thinking.

“This is not a bad area,” he said. “The houses are quite expensive actually.”

When he ushered me into his home, my jaw dropped at its elegance. Mohamed was an architect and his house was enormous, immaculately decorated with Arabic and Berber design, filled with ornaments. My senses were further stimulated when I followed my nose into the dining room, where he had prepared a Berber tagine. It was far too big for one person, surely we were expecting guests, but it was just for us. It was followed by the sweetest cakes and Berber tea imaginable.

We went on to discuss his daily life, which was fascinating. I foolishly underestimated the progressiveness of life in Rabat, and he was also keen to know about Gibraltar, or Jebel Tarik as he referred to it. Gibraltar was of great interest to him as an important landmark in Muslim history and we were soon encapsulated in discussion on the mixed forms of architecture on the Rock that spans different dynasties.

Mohamed had much more than a couch, he had a whole spare room for guests and he told me to make myself at home as he placed enough blankets alongside me to survive a second ice age. I felt completely at ease with someone who I had just met. I was in his home, eating his food and sharing some great stories. My kind host had to work the next day, but he told me all about the best places to visit, what time was best to avoid the crowds, cheap but authentic restaurants, hidden secrets and much more. I felt that I had given little, if anything, but he seemed happy to share his life with me, even if it was for just a couple of days. Before I left, I explained to him that I felt that I hadn’t fulfilled my side of the bargain, whatever that was, and asked him if he would accept some sort of payment. I didn’t feel right giving nothing back for what was an experience that far surpassed that of a hostel. Mohamed laughed in that same contagious way he did that first time we met and just said:

“Well, the next time I’m in Gibraltar, you can show me the same hospitality.”

I knew that I could never live up to it, but it gave me some measure on how I should behave when I would eventually become a host myself. I left a glorious reference and hope it somewhat reflected my gratitude to this wonderful man who opened up the world of Couchsurfing to me. 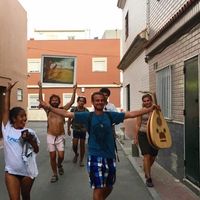