Last December we crossed Switzerland from West (Geneva) to East (Rorschach). We did it mostly by foot but we also did a little bit of hitchhiking to join our Couchsurfing host in time for Christmas. During this trip we slept 18 nights in Couchsurfers’ houses, 18 unique hosts and wonderful evenings.

Let’s introduce ourselves first. We are two French travelers, Amélie and Vincent, who have decided to cross the continent, from France to China. We do it mostly by foot, but we also allow ourselves to do hitchhiking, biking, canoeing, etc.

We started this adventure because we wanted to travel, we like hiking and nature. But also because we want to discover new countries, peoples, and cultures. Therefore, we have naturally decided to use Couchsurfing sometimes during our trips. You can find more on our travel blog or on Facebook.

At the beginning of our trip (in France), we slept a lot in a tent. But with the winter time coming, we started to increase the number of Couchsurfing experiences. Couchsurfing has become so widely spread nowadays that you can actually walk from town to town and find a host quite easily. And in fact, that’s almost what we did in Switzerland.

When we entered Switzerland, our first Couchsurfer was Jan, a Polish man. He already had some experience with traveling as he once hitchhiked from Poland to Thailand for 8 months. During the evening, he made mashed potatoes for us. « The Polish way: No mashed potatoes machine, I hold the pot and I shake it hard ».

Michael was from Austria. Once, he hitchhiked from China to Austria in only 5 months. For the evening, he invited a friend to his house. We made a curry, discussed a lot, and ended the evening playing Carrom, an Indian Game that was so much fun.

Eric was French, from Vendée. He was another expat in Switzerland. Some time ago he had crossed Canada by hitchhiking. He was also part of the hitchhikers association of Fribourg. Eric was supposed to have an interview the next morning but had accepted to host us anyway. We talked a lot and enjoyed a sketch about Switzerland by Marie-Thérèse Porchet.

One other night, a last minute request lead to a peaceful evening speaking about traveling books. Olivier had crossed several countries. He was now retired and held a collection of old books written by the first explorers.

Johanna used to sail. Now that she is in her fifties she switched to a new way of traveling: she sees the world in her jeep with a roof tent.

We also hitchhiked a little bit to make sure we reached Patricia’s house for Christmas. Patricia was from Germany, she taught French and English. She and her two sons hosted us on the 24th and 25th of December, they were also hosting another Couchsurfer: Hebert, a nice Brazilian man, now living in Ireland. He was traveling from a European capital to another in order to find a new place to live. We will remember his smile and his amazing stories. We listened to German Christmas songs and we enjoyed that Christmas Eve very much.

We enjoyed Couchsurfing in Switzerland a lot. The Swiss love their country with its many lakes and mountains. They also like to discuss and to share local specialties. We ate a lot of cheese and chocolate!

We met so many people thanks to Couchsurfing!

You can find more on our adventures in Switzerland in the full article (in French):
Ca joue en Suisse 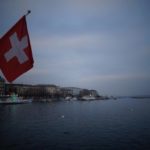 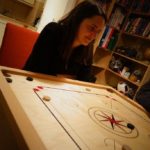 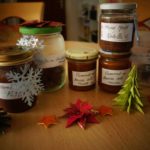 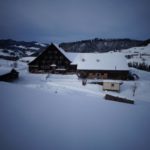 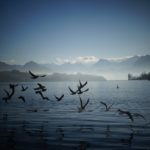