Many of our friends in Couchsurfing know a little about the story, but when other people ask us, “so, how do you know each other?” The best answer is that we met in a social network where members use it to host each other while they’re traveling.

For those who are not familiar with the subject, the idea of opening the doors of their home to receive a person who contacted them on the internet tends to be confusing and people often ask about the security of Couchsurfing.

From the beginning I realized that I had found a fabulous tool to travel and also something that can cause some social change by promoting this gesture of hospitality to a stranger. Giving and trusting are values that really have to be preserved, especially in countries like Mexico where I am from.

How did I meet Couchsurfing?

It was in 2006 when I heard about Couchsurfing during a student exchange program in France. A friend told me about it just few days before I had the opportunity to leave my comfort zone and visit countries like Switzerland, Germany, The Netherlands and Belgium.

I had some experience as a solo traveler, sometimes visiting relatives who live far away or friends in other cities, always staying in a hotel or hostel. To tell the truth, sending a couch request to a stranger was new in my life and a bit strange because the only thing that the other person could know about me was written on my profile.

Now I have almost 12 years of Couchsurfing experience and there are many good stories to tell. I had the opportunity to meet amazing people and keep ties to them through the years, but my 1st experience is the most symbolic because it caused one of the greatest changes in my life.

I arrived in Bern, Switzerland and was hosted by a guy who lent me one of his bicycles to ride into the city. We visited the Paul Klee museum, went out for drinks with his roommates and shared breakfast around a long and interesting talk. I never imagined that I would be crossing the Swiss capital by bicycle at midnight, or following a recommendation to discover the best fragrances in the city’s rose garden.

After that trip where I met several strangers that made an impact on my life, I realized that it wasn’t fair to arrive with empty hands to a place that gladly opened their doors to me. So I started traveling with a bag of Maseca (corn flour) in my backpack and offered a Mexican dinner with the ingredients that I had around.

I also got more involved in the cities where I settled and after a season in Toulouse, where I lived closely with people very committed to the community, I became an organizer of meetings in France and later in Mexico on my return.

My goal was to bring together all the people who wanted share their time and exchange travel experiences and this way the members of the community can become closer and build a safer community.

In one of those many meetings I met Eva, and after getting to know her in other events where I was the organizer, we ended up traveling together as well.

In May 2016 me and Eva traveled to Europe. In every city we were hosted by those faces that I met years ago. Couchsurfing friends in other parts of Europe were inviting us to visit them. Couchsurfing is so much more than free accommodation!

It is an investment of time to get to know another place through the person who hosts you, and the best way to return that favor is by giving a gift or leaving something personal with your hosts, like a postcard from your place of origin. Sometimes we ask our hosts if they would like something in particular from our region. Or sometimes we cook together, or even pay for a dinner. It’s a little gesture for those who take the time keep a space in their home for you.

You can host travelers with the same emotion and detail that others hosts had with you. If you can’t host travelers, don’t worry, you can be their guide or go out together for a coffee or a beer.

Couchsurfing has given me so much happiness. Knowing that I can visit many places in the world with the confidence that I will find someone that I met in another time, or find an unknown face that will eventually become familiar, and years later with whom I will share stories.

Therefore, this community changed my life and introduced me to the person I most enjoy to travel with, that’s why I appreciate Couchsurfing so much. 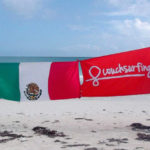