One of the best things I have ever done in my life was when joining Couchsurfing. Recently,  there was a big Couchsurfing event which happened in Malaysia that was called CS Asean Couch Crash 2018. It took place on February 10th and 11th with around 120 people and was held at Tadom Hill Resorts. People from all over the world gathered to celebrate and make it a success.

The event was organized by three well known Ambassadors from Malaysia, Indonesia and Singapore.

This close knit community of Couchsurfers from these 3 countries have always been actively organizing various events within their respective countries. For the first time, these three countries decided to hold a cross-community event involving all Couchsurfing members from South East Asia. Two people from Couchsurfing headquarters- Zareen and Gabby- were also invited to attend this event and they enjoyed it thoroughly.

Everyone is waiting for the event to start to gather and have fun. It’s time to exchange  culture and diversity among the Couchsurfing people and have fun together.

Its a 3-day weekend starting with the evening sunset at Heli-lounge bar overlooking the city skyline and outlet. Everyone is gathered at the Heli-lounge bar for welcome drinks followed by a night of supper and mingling with new friends.

On 10th February everyone is supposed to gather at the Times Square mall to get on the bus to reach Tadom Hills which was arranged by the organizers.

Along the way to Tadom Resorts the people from Couchsurfing had a nice tour to Putrajaya with spectacular architectural buildings and locations like Putra Mosque, Perdana Putra, Seri Wawasan Bridge, Putra Bridge and Putrajaya International Convention Centre including the interpretation of a guide. After the completion of the tour everyone reached the Tadom Resorts by 4pm.

Once everyone had arrived we gathered in the main hall. Camping tents were given to each person and dinner was served at the gathering hall.

The event started at 6pm with a gathering of all the Couchsurfing members introducing themselves to other people which includes some funny conversations from Indonesian people. Zareen and Gabby from CS Headquarters gave us valuable tips and information from Couchsurfing. They patiently answered many questions from members of the community. After the introductions and question & answer session was over, we went to Tadom Hills for the party.

The organizers arranged some classical music and cultural shows from their own countries. The Fire dance was done by a local girl which was carried out along with the music. She outperformed everyone for 15 min and we all enjoyed the performance.

The event continued along with Dj music and Bhangra dance from 10pm until 3am along with fire crackers. Some people continued the whole night speaking with each other while having some indomie noodles.

On the 11th February Couchsurfing members had breakfast at the gathering hall served by organizers. After breakfast we moved to Orang Asli village at Banting by walking around 15 minutes.

The village people showed us the way of living in old days. For example, how to hunt animals by using a blowgun with needles. They even performed with some natural drumsticks and flute music from their tradition. We had lunch along with the village people. The event was over after this and everyone went back to their own countries.

I have done so many beautiful things because of Couchsurfing. Through Couchsurfing I learned many things from the local people from around the world. Couchsurfing gave me this opportunity and gave my life very valuable lessons and some beautiful experiences along with it. It filled my journey with stories, and I got to meet people from all over the world and learn about their homes and cultures.

Do we need religions and cultures to make friends? I don’t think it is necessary. We just need to believe in people and make friends around the world and show peace to everyone to travel together.

Finally, whenever I go to a new country I can say for sure that I have a friend waiting for me to show me the places in their city or country. I am sure you will definitely find a travel partner or real life partner through Couchsurfing and make lot of friends.

Thank you for the Pics from Andy Carlson and other Couchsurfing members who attended this event. 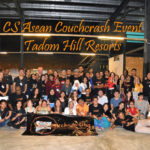