I was in the middle of the ocean. The coordinates are uncertain, but somewhere between the Pacific and the Indian Oceans. The program – a ‘floating university’ voyaging to 12 countries each semester – is a breeding ground for social entrepreneurs. Little did I know that rocky morning on deck 6, just weeks after boarding the ship, that something would be born from me too.

We ported. I was in Spain when I lost my wallet. On the streets of Cadiz, it seamlessly disappeared. As if things could get any worse, my only emergency debit card was swallowed hours later by an ATM. I didn’t enter my pin fast enough. Enter panic mode. It was too late in the night to have someone from the bank retrieve it. There was no way I was calling my family back home – they were already reluctant of my decision to partake in such an adventure: why not stay on campus, or study abroad in France instead? “I told you so”, mom would say.

The very next day, we were embarking for Ghana, and I had nothing but $50 in my cabin. Because I hadn’t made any plans and I didn’t know where I would be staying in Ghana, there was no way to have any money wired to me. Amid my personal distress, I rationalized that $50 would be enough for me to have at least two meals a day for the five days I would be there.

I ended up being much more than fine. I had arranged to Couchsurf with a family in Ghana that I only knew via message; there was no WiFi on the ship, so I wasn’t even able to download their pictures. The first time I met them was at the port, shortly after we docked. Olivia slapped my hand as I picked at my fingers – the same way my mother does. I was home. For months, I hadn’t really been part of a ‘home’—sure, the ship was home, but nothing compares to being part of a family – if only for five days.

While sharing my last meal with the Benneh’s, I couldn’t stop thinking about coming back to Ghana. But when? Perhaps never? The rush of emotions led me to a solution for the separation: I thought about recreating our experience by Skyping and virtually sharing a meal. I would collect the ingredients for the recipe and make the meal alongside them. I would then sit on my living room floor and eat with my hands, as if I was there in Accra with them. This would be almost as close as being in their kitchen.

That was the moment that gave birth to the idea for my social venture – KitchenConnection.org – a global platform that connects people to host or participate in live, online interactive cooking classes now working with the United Nations on fighting global hunger– why not open this opportunity to the world? Fast-forward. Four years later, that serendipitous moment of despair in Spain has turned into my entire professional life. Last year, I returned to Ghana as Olivia’s maid of honor. Ghana wanted me back after all. 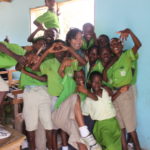 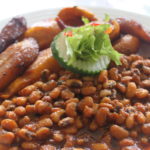 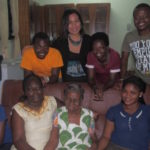