Are you a solo woman traveler who is thinking about Couchsurfing? First, let’s break down what Couchsurfing is.

According to Urban Dictionary, Couchsurfing is:

“What someone who can’t afford rent on their own and/or can’t find roommates quick enough does when they are “between” places.”

While yes, not having to pay is a great perk, Couchsurfing is so much more than finding a place to crash for free. It’s a site for meeting and staying with locals all over the world. This was a great way for me to meet people while traveling on a budget in Colombia. I’d only met up with one person through Couchsurfing before, in 2009. I’d I met up with a family of Chicano descent in Bakersfield, California. The father, Jesus, had found me and invited me for dinner with his family because his oldest daughter was thinking of going to Wellesley College, my alma mater. She didn’t end up going, but her younger sister did (and won the hoop rolling tradition).

Couchsurfing was one of the best choices I made while traveling in Colombia, and I was very intentional about how I used the site. Here are my Couchsurfing tips for solo women travelers (or anyone else who finds them useful) and here’s how I applied them to make wonderful friends in Cartagena, Colombia. I even stayed an extra day with them and missed out on the biggest lesbian-themed night of the Pride Festival in Bogotá (I’d queer it up in Bogotá eventually, anyway!). Follow my advice for the best experience.

Most large cities have active Facebook groups. I introduced myself, said I was traveling alone, and was looking for people to meet and a place to stay for three days. Shortly enough, the group’s leader invited me to a language exchange meetup. One woman my age named Angie, who lives in Medellin and was visiting a friend in Cartagena also replied to my post. She invited me to join her and her friends at Playa Barú (La Playa Blanca), which is famous for its white, sandy beaches.

The Couchsurfing application lets you post the details of your trip. Do this as far in advance as possible. I did this before coming to Cartagena so that people either in or from the city would know about my trip. I even had someone from Seattle message me who was traveling to Cartagena at the same time. He wanted to get drinks, but I was more interested in meeting locals and learning Colombian slang. I was only in the country for two weeks, and wanted to immerse myself as much as possible, no matter how vulnerable I’d feel.

3. Reserve a place to stay in advance.

My biggest concern as a solo woman traveler while Couchsurfing in Colombia is definitely safety. I had reserved an Airbnb apartment for three days, but since I hadn’t yet bought my flight out from Cartagena to Bogota, I was open to staying longer. I also felt safer having a place to stay and being able to feel someone’s energy out before crashing with them.

As a solo woman traveler, it’s better to have a backup plan, even if it’s an $8 dorm room in a hostel when you can’t Couchsurf. If you’re not feeling someone, you have the right to discontinue seeing them and to put your safety first. Or, it’s nice to have a backup plan if your host cancels on you at the last minute.

When you don’t know anyone in the area, it’s not as easy as it would be to let your friends know your whereabouts. I should have given my Airbnb host, Libi, a heads up that I was going outside of the city and with whom. I didn’t even have a working phone in Colombia, since I didn’t even bother buying a chip to put in my phone, but in retrospect, I should have. I merely relied on phone booths in the street.

After my taxi-related sexual assault later in Bogotá, I would buy a smartphone in Panama so that I could use Uber and other apps to hold my drivers more accountable. Check out this video I made with my trusted taxi driver, Hugo, in Managua, where he helps me explain why it’s important to have a taxi’s number on speed dial!

If I had been nervous about not being liked, then I wouldn’t have met up with anyone. I knew that if I didn’t hit it off with someone, that I could choose to no longer meet up with them. It’s that simple. After having lived in Nicaragua for two years, I’ve become a much more open and patient person. I’m also an introvert who judges a situation, a conversation, and people carefully before jumping in. To some, I may come across as quiet. Around others, I’m a non-stop giggler.

I’ve also become used to being an outsider so that I’m used to being uncomfortable. Growing from discomfort makes me excited about travel. The discomfort teaches me that I have preconceived notions about a place, just as I did about Medellin and Cartagena. These notions are both positive and negative, but traveling helps me break down where this notions come from in the first place, deconstruct them, and rebuild them for myself.

Above all, share your culture and ask questions about your hosts’. Ask them about their slang, their music, their customs, their passions, their food, and anything else you’d like to know as long as you’re respectful. Treating your hosts to thank them is always a good idea, whether you’re buying drinks or writing them thoughtful thank you note (or blog post dedicated to them!).
I hope my Couchsurfing tips for solo women travelers inspired you to use this option on your next trip. Do you have any other tips? Share in the comments! 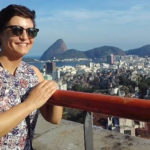